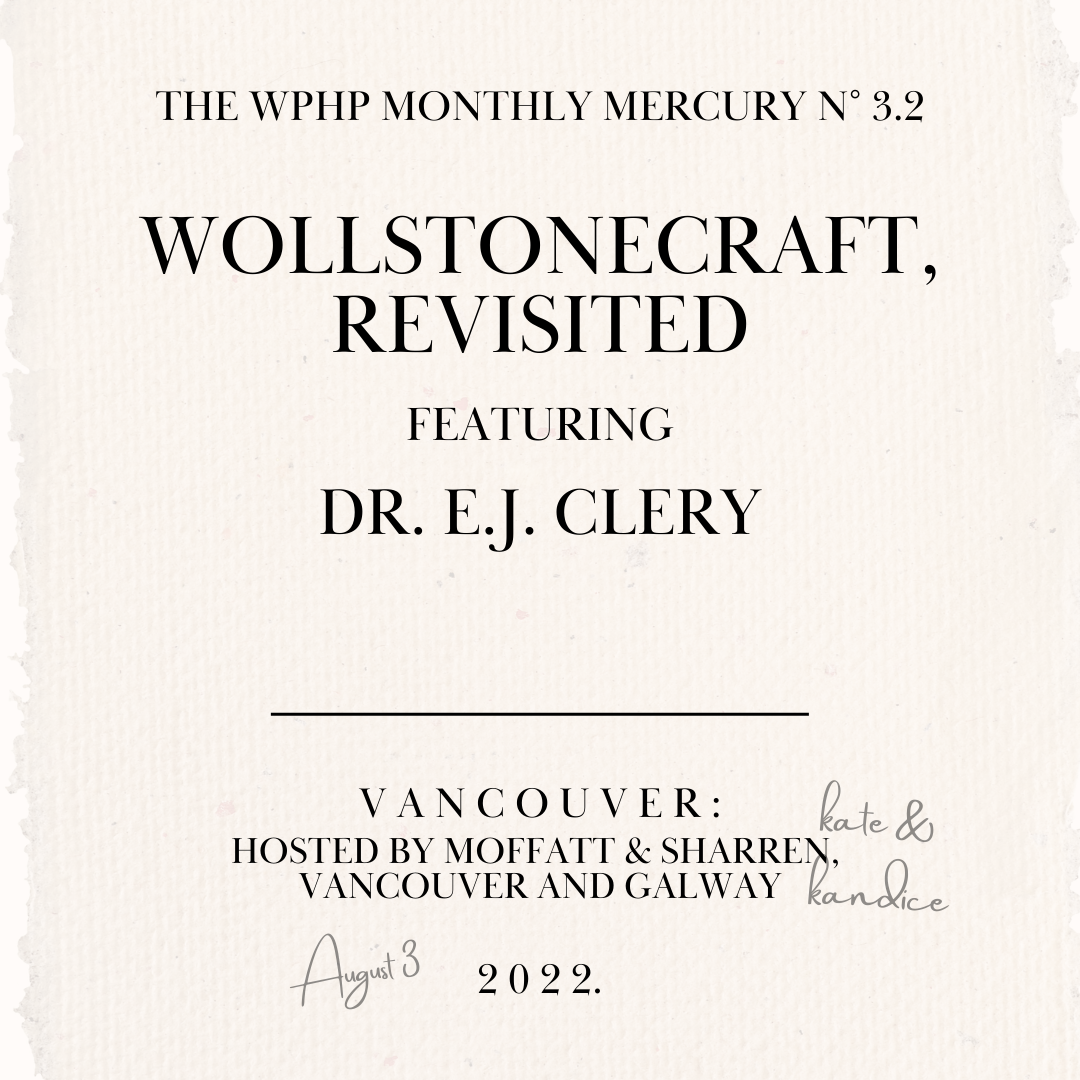 You can listen to Episode 2 of Season 3 of The WPHP Monthly Mercury, "Wollstonecraft, Revisited" on Apple, Spotify, Stitcher, Google Podcasts, and other podcast apps, available via Buzzsprout.

If you’ve ever taken an undergraduate English class on the Romantic period, you have probably encountered Mary Wollstonecraft, best known as the author of Vindication of the Rights of Woman (1792). A widely read and controversial writer of political treatises, fiction, travel writing, and other works during her lifetime, she has been variously vilified and mythologized since her death in childbirth in 1797, and has long been a staple in the literary canon. But can we ever really know Wollstonecraft?

In the newest episode of The WPHP Monthly Mercury, hosts Kate Moffatt and Kandice Sharren are joined by Professor E.J. Clery, General Editor of a new edition of The Works of Mary Wollstonecraft, forthcoming from Oxford University Press. We consider not only her canonical works and her reputation as a philosophical “powerhouse,” as she is so often thought of, but also how myth can write historical figures larger than life—and as a result, sometimes obscure their lived reality. We delve into her life, both the highs and the lows, and how thinking about the ways in which many of the issues that afflicted Wollstonecraft, like precarious employment, labour, and challenges to women’s rights, are present in her writing. We think about how considering these challenges both for their own sake, and within the framework of her philosophy, can serve to humanize this massively influential Romantic figure.

E.J. Clery is Chair Professor of English Literature at Uppsala University. Recent publications include Jane Austen: The Banker’s Sister, (Biteback Press, 2017), and Eighteen Hundred and Eleven: Poetry, Protest and Economic Crisis (Cambridge University Press, 2017), winner of the British Academy’s Rose Mary Crawshay Prize. Research for these publications was supported by a Leverhulme Trust major fellowship. She is currently working on A Very Short Introduction to Mary Wollstonecraft, a new paperback edition of Wollstonecraft’s fictions, and, as General Editor, the new Collected Works of Mary Wollstonecraft, forthcoming with Oxford University Press.

Music by: Ignatius Sancho, “Sweetest Bard”, A Collection of New Songs (1769) from https://brycchancarey.com/sancho/bard.jpg, and played by Kandice Sharren

A Vindication of the Rights of Woman (title)

A Vindication of the Rights of Men (title)

Letters written during a short residence in Sweden, Norway, and Denmark (title)

Maria: or, the Wrongs of Woman (title)

The Woman of Colour (title)

Butler, Marilyn. Romantics, Rebels and Reactionaries: English Literature and its Background, 1760–1830. Oxford UP, 1982.

McInnes, Andrew. Wollstonecraft’s Ghost: The Fate of the Female Philosopher in the Romantic Period. Routledge, 2017.

This podcast draws on research supported by the Social Sciences and Humanities Research Council.